Want to see how a public health crisis unfolds in real time? Learn in this article how a team from CDC dealt with an outbreak of Ebola virus in Uganda in 2012.

In late August a three-member team from the Centers for Disease Control and Prevention in Atlanta flew into central Uganda  to go to work on an Ebola virus outbreak that had just broken out in the summer.


FIND SCHOOLS
Sponsored Content
According to this report, the team arrived on Aug. 8, about 10 days after confirmation of the outbreak. Some of the equipment they brought with them included 13 trunks filled with biohazard suits, toe tags, surgical gowns, respirators, nets and much more. The purpose of this trip above all else was to study exactly how Ebola is spread to and among humans.

This CDC team stayed at the Hotel Starlight in Karaguuza, which is fertile but undeveloped area of Uganda. It is about 120 miles west of Kampala, the capital. Some of their work involved trapping several hundred fruit bats in caves in the area. They thought that the animals may be harboring the Ebola virus, and they wanted to gather as many as they could so they could conduct tests and research. One of the researchers had done studies of Egyptian fruit bats, which carry a related bug, called the Marburg virus. This researcher thinks that about 5% of the bats could be carrying the virus. Therefore, the team needed to catch a large number of them to hopefully snare at least a few with Ebola.

Ebola first was identified in Zaire in 1976, which is now called Congo. At that time, 318 people got the infection and 280 people died. And 19 years later, 254 people died of the same strain of Ebola. Four outbreaks in Uganda have happened since 2000.  It is a terrifying, mysterious disease and is highly infectious. The virus interferes with the immune system and disrupts the function of the liver, kidneys, blood and respiratory system. It can cause severe hemorrhaging, where blood fills the intestines and spills from every body orifice. Death in extreme cases occurs in a week. Contacting a person with the virus, especially a dead contaminated body, is very dangerous and is one way the virus spreads. The most deadly forms of the virus kill eight of every 10 people it infects.

[[When the outbreak first happened here, it was thought that the people who were infected had malaria. However, one of the health workers who tended to the stricken patients died from a high fever. That is when the health ministry decided to look closer to see if Ebola was the cause.]]

Blood samples from the affected parties were tested for Ebola and they came back positive. Health authorities in the country went to villages in the countryside and found everyone who had contacted the family with the Ebola, which had killed nine of them. All of them were tested. Eventually 407 people were identified as contacts, and all were monitored for three weeks. The Ugandans found the person who seemed to start this outbreak, but it was not clear how that person had gotten the virus. That is what the CDC team came to learn. 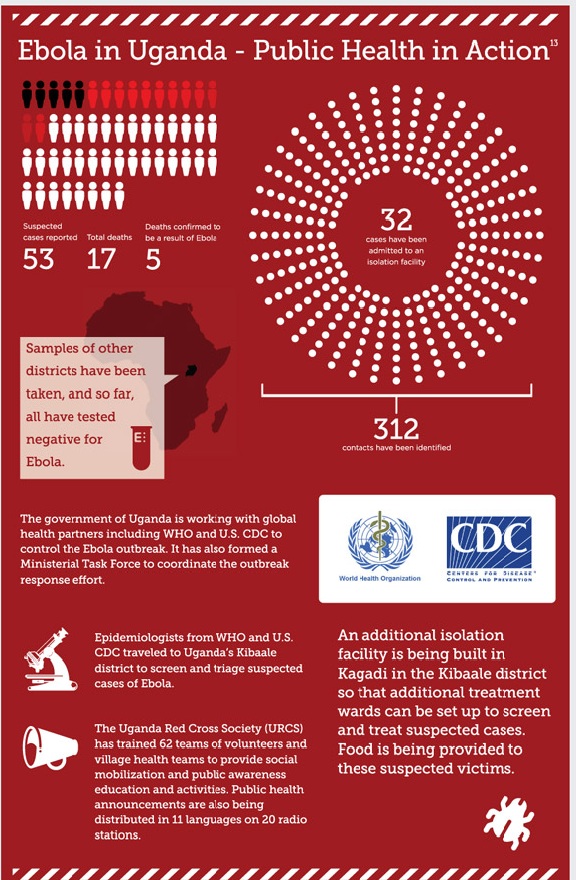 Source: Visualization into the World of Public Health