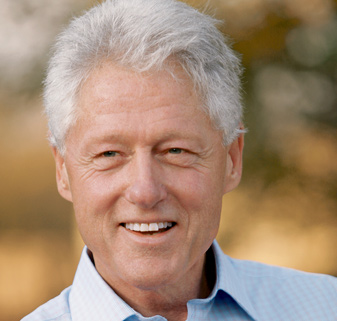 President William Jefferson Clinton was the first Democratic president in more than 60 years to be elected twice, and he led the US to the longest economic expansion in history, which included the creation of over 20 million jobs.

After he left office, President Clinton established the William J. Clinton Foundation, which has taken a major role in the improvement of public health. In its 10 years of existence, the Foundation has helped to improve global health, strengthen local economies, promote child health, and protect the environment.

At this time, the William J. Clinton Foundation has volunteers and staff around the globe who are working to improve people’s lives in several ways:

Currently, the Foundation is working to support the neighborhoods of New York City that have been devastated by Hurricane Sandy. On November 18, 2012, the Clinton Global Initiative brought together people and organizations around the US to volunteer for a day in a local community, and this effort helped the clean up effort in New York.

The Foundation headed by President Clinton has had many measurable accomplishments in its 10 years of existence in these areas of public health:

President Clinton was born in 1946 in Hope, Arkansas. He was raised by his mother and stepfather in Arkansas. The young Clinton excelled in school and also as a player of the saxophone. He was a delegate to Boys Nation in high school, when he met President Kennedy in the Rose Garden. This encounter made him want to pursue a life of public service. He eventually graduated from Georgetown University in international affairs, and then attended Oxford University on a Rhodes Scholarship. He obtained his law degree from Yale in 1975. Clinton was elected attorney general of Arkansas, governor of the state, but was defeated when he ran again in 1980. However, he was re-elected governor in 1982, and served five more terms as governor, leaving office in 1992. He was elected president in 1992 and reelected in 1996.

His wife, Secretary of State Hillary Clinton, have one daughter, Chelsea, and live in Chappaqua, NY.

After President Clinton left office, he joined President George H.W. Bush on three separate occasions to help with public health efforts after a tragedy or natural disaster. The two former presidents went to South Asia in 2004 after a devastating tsunami, to New Orleans after Katrina in 2005, and again to New Orleans after Hurricane Ike in 2008. Clinton also visited Haiti with President George W. Bush after the 2010 earthquake. The Clinton Foundation also does a good deal of work in support of economic growth, job creation and sustainability in Haiti.

On November 18, 2012, President Clinton and his daughter Chelsea urged volunteers to turn out for their Day of Action for New York. The Clinton Foundation was trying to recruit thousands of volunteers to help people recover from Hurricane Sandy. Many neighborhoods in Queens, Staten Island and Long Island are still severely damaged by the hurricane. Clinton said that through this strong effort of volunteers, hopefully homes, communities and cities can begin to make progress and move on from the hurricane aftermath.

“We live to prove that cooperation works better than conflict.” – Clinton Global Initiative meeting of global leaders from around the world, Sept. 2012

The Clinton Foundation is very active on Twitter (@ClintonTweet). Recent Tweets on Hurricane Sandy include:

President Clinton viewed the damaged boardwalk at Rockaway Beach during our #dayofaction for #Sandy recovery instagr.am/p/SL3sDguMtO/

President Clinton met with the our #DayofAction volunteers helping the Rockaways recover from #Sandy. instagr.am/p/SLwIj4uMlp/

Our volunteers hard at work for #sandy clean up. #dayofaction instagr.am/p/SLj4M9uMpn/