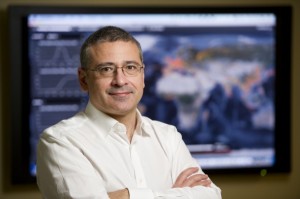 Alessandro Vespignani is a physicist from Italy and a Sternberg Distinguished Professor of Physics, Computer Science and Health Sciences at Northeastern University.

Dr. Vespignani is best known for his research on complex networks, and especially work on network theory applications related to the spread of disease and for his studies on the topoligical properties of the World Wide Web. He is the co-author of the book Evolution and Structure of the Internet, and in 2008 with two other authors, he published the monograph Dynamical Process on Complex Networks. At this time, he is writing a book on self-organized criticality and avalanche phenomena.

Vespignani was recently elected fellow of the American Physical Society and is serving on the board of several physics associations, journals and institutions.

Vespignani’s research is focused on studying techno-social systems. This is where infrastructures that are made of several technological layers are operating together in the social aspect that is driving their development and use. In this context, Dr. Vespignani’s aim is to understand how these elements assembled in large numbers can give rise to many types of macroscopic and dynamic behaviors.

At this time, his research is focusing specifically on these lines:

Awards and honors include:

Dr. Vespignani earned his undergraduate and doctoral degrees in physics from the University of Rome in 1990 and 1993. After his postdoctoral studies at Yale University and Leiden University, he did work for the International Center for Theoretical Physics in Trieste for five years. He became a professor of physics at Indiana University in 2004.

According to Vespignani, he says that his current research involves the interdisciplinary application of statistical and numerical simulation techniques in the analysis of epidemics and spreading phenomena, and also the study of social, biological and technological networks.

Dr. Vespignani has been working on a study, Quantifying trading behavior in financial markets using Google Trends,  involving an analysis of how many Internet searches are driven by fear. For example, when there are many searches conducted for debt, stocks and portfolio, this can indicate a coming downturn in the markets. Also, when people search for cures for flu or meningitis in large numbers, this can also signal illnesses that are spreading that affect public health.

“The fact that evidence for human decision making can be distilled from an enormous, preexisting data set rather than by conducting surveys or questionnaires is fascinating.“It’s the meteorology of society.”

Dr. Vespgnani is not on Twitter, but his work has gained much respect throughout the world, and recent Tweets about him include these:

Big data,”the meteorology of society.”Nice turn of phrase by Alessandro Vespignani of Northeastern U.

To contact Dr. Vespignani and to get more information, please refer to the Northeastern University Website. Thank you for your work in public health, Dr. Vespignani.