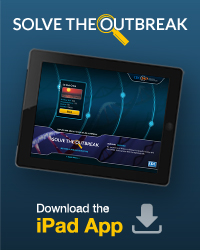 The Centers for Disease Control and Prevention (CDC), who in the past came up with a controversial zombie apocalypse campaign, have a new release – a free iPad game app that allows you to track and stop a fictitious epidemic.

People who use the app, which is called Solve the Outbreak, can pretend they are a detective for a public health agency and take steps that include putting a quarantine on a village, requesting more laboratory results, and doing interviews of sick people. Having strong problem-solving skills are rewarded by giving you high scores and badges.

The CDC views this as a good opportunity to educate young students about how public health works. The hope is to eventually draw in some future epidemiologists to the field, according to a CDC spokesman. Epidemiology is a strong career field, with a 24% increase in jobs expected by 2020, according to the Bureau of Labor Statistics.

The app was developed inside the CDC and cost $110,000 total to develop, not including the salaries of the developers. The goal is to have about 20,000 downloads each year.


FIND SCHOOLS
Sponsored Content
This new game app is the latest attempt by the CDC to utilize pop culture to get the public to prepare for a major epidemic outbreak. Back in 2011, the CDC came out with a campaign based upon zombies. It included zombie-themed posters that you could download and a novella that was called Preparedness 101: Zombie Pandemic.

The agency stated at the time that the campaign was tongue in cheek. But later, there were several violent incidents that occurred in society and the CDC had to make a statement that there were no signs that a zombie apocalypse is imminent.

A CDC official told the media this week that the zombie idea first came after Twitter users replied to the  types of disasters they were ready for. Staff decided on the zombie theme because it is hard to get people to think about preparing for emergencies before there is a disaster. The CDC came up with the zombie posters to get some attention and get people involved in a disaster plan before it is too late.

Many experts think that the new epidemic app is a great idea. One doctor, as he was having his coffee, said that he was playing the game and it was having him try to track down a stomach bug with kids on a trip at school. He thinks the app is a good way to get people to think about how the CDC tries to solve epidemic outbreaks.

In the app, users are able to examine many variables that are based upon factual information regarding a disease outbreak. The user then needs to make decisions just like a real person at CDC would. Some of the questions that you have to answer are whether you should quarantine a city, or to get more lab results. At this time, the app has three outbreak scenarios that are based upon cases in real life.

As you work through each puzzle, you earn points for each clue and you get a higher score if you have a better answer. The badges that you can earn range from Trainee to Disease Detective. You can post your scores on Twitter and Facebook, and users can challenge their friends to try to do more to stop the epidemic.


FIND SCHOOLS
Sponsored Content
The CDC has stated that it intends to expand the free app in the near future. It plans to design more outbreak scenarios to make the game more usable over a longer period. The new scenarios will be added to the game in later additions.

The app is available as a free download from iTunes.