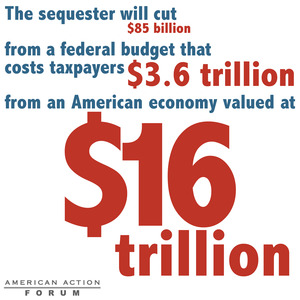 According to the Budget Control Act of 2011, if congress cannot agree to cut $1.2 trillion from the budget over nine years by March 1, 2013, the ‘sequester’ will take effect. This will cause about $85 billion in increased spending to be cut for the rest of 2013.

Under the rules of the sequester, the cuts are split up between defense funding and domestic funding. This will affect programs from Medicare to education to FAA funding. Most entitlement programs, including Medicaid and Social Security are not affected. The Budget Control Act mandates that all of the cuts be spread in an  even fashion through every affected program. This will limit how administrators can direct funds to the most needed areas.

According to recent reports, the $85 billion decrease in this year’s increase in spending could spell big trouble for public health in communities around the country. The Association of State and Territorial Health Officials, or ASTHO, has stated that the sequester would cut $2.5 billion from public health programs in 2013. this includes $545 million from the CDC budget.

Also, about 750,000 low income mothers and their children could lose their WIC benefits. These funds cover health care and supplemental food. Disaster relief in many parts of the country will be cut. There also are claims that many public health grants to states and localities would be slashed. This would be on top of cuts that would be in addition to earlier reductions in funds for public health agencies.


FIND SCHOOLS
Sponsored Content
The American Public Health Association states that the sequester could result in 55,000 fewer immunizations and a decreased ability to respond to epidemics and more HIV transmissions. Also, the Department of Health and Human Services reports that the sequester could cut mental health services for 375,000 people at least. This could lead over 100,000 people to not receive critical addiction services. Visits to providers of Indian health services could be cut, and the AIDS Drug Assistance Programs could be reduced, too. FDA could have to cut food inspections and grant funding also could be cut.

Other potential effects of the proposed reduction in the increase of annual spending include:

The association claims that these cuts would be on top of the ones that have already been made that have led to the reduction of 55,000 public health jobs.

Fortunately, some mandatory public health-related programs cannot be cut. These include Temporary Assistance for Needy Families, the Supplemental Nutrition Assistance Program and programs that are administered by the Veterans Administration.

Also, the sequester could have some negative effects on the implementation of the Affordable Care Act, which includes cuts to the Prevention and Public Health Fund.


FIND SCHOOLS
Sponsored Content
As of this writing, it appears that the sequester is going to indeed take place and these cuts to public health funding will occur. The Obama Administration and Congress have not been able at this point to agree to a balanced deficit reduction plan that includes both tax hikes and spending cuts.